A Powerful Path To Unlock The Wild Goddess Within You

Inside every women is a Wild Goddess, a dynamic and unfettered woman.

Unleash your inner wildness and access the full force of your femininity when you embark upon this journey to the depths of your soul., all in one complete package.

This is the journey to  finally free the glorious woman that has been waiting inside you all along.

What Awaits You On Your Journey

In The Magical Goddess Book I share the journey that began as my quest to unlock the Wild Goddess inside me, and quickly grew to a journey that unfolds in every woman — how to be free, powerful, and completely and unabashedly womanly.

The Magical Goddess Book is an invitation to uncover the Wild Goddess that waits inside you to be unleashed!

My true story is more than an inspirational journey — I also include The Magical Goddess Companion Guide. You’ll get new prompts, questions, and exercises each day for 28 days. It’s as if I am walking beside you, guiding you all the way. You get to explore what it is to be a woman as I did, a deep-dive inquiry. As you explore, you will uncover and revel in your sacred feminine inner power.

Write your explorations in this guided printable journal. As you explore your Woman Self, this becomes YOUR journal, YOUR adventure into your wild side, and YOUR new story that YOU get to live.

We women must claim our power in order to live our Destiny. Unfortunately, modern culture has few strong positive models of femininity. I offer my journey as a guide and exploration to invoke your Wild Goddess and reclaim a juicy life.

On your journey you’ll discover deeper truths about yourself to reveal the wild, luscious, and confident woman you know is waiting inside you. Creating this journey changed my life forever — I invite you to change yours, too.

A Quest For Deep Inner Truth…

In the spring of 2012 I went on a quest to find the wild, powerful woman inside me that I hoped was there. I wanted more in life. I wanted the spark, the inner beauty and assuredness that comes with fully embracing the beauty of Who I Am. I wrote articles about being a Wild Goddess but didn’t yet believe I was one.

So I embarked on a journey of discovery — 28 days to dive deep into the world of the feminine, 28 days to discover my inner Wild Goddess.

I opened my heart and found an evolving being — sometimes messy and unpredictable, sometimes wise and knowing. I found deep hard truths. I found exquisite beauty. I found ways to love the woman I am. I found a road to my True Voice, the voice of the sacred feminine. I found the voice of Destiny.

As each day dawned, a new topic arose and I wrote about it. I published a series of intimate, open-hearted blog posts. This book is a revised compilation of those posts, along with never-before published material and daily deep-dive inquiries and practices to spark your personal journey to find the Wild Goddess who dwells within you. 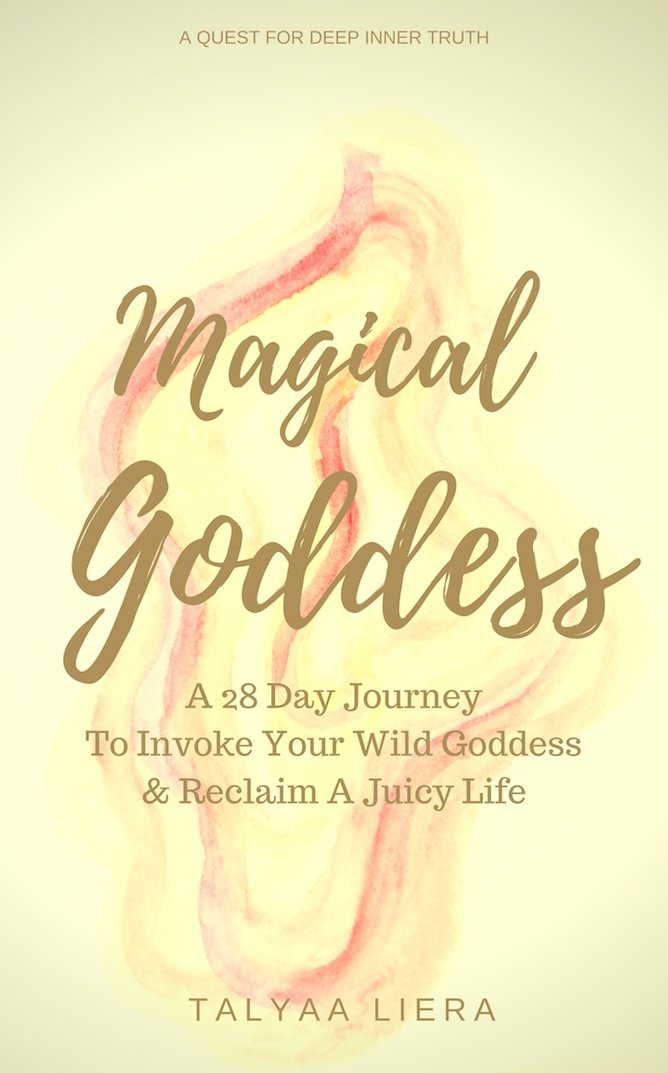 What Gifts Await You

How You Know You Hunger For This Journey

Come Home To Yourself & Be The Goddess You Know You Are

Every women is a sacred portal to the divine, a physical embodiment of nature’s feminine qualities of strength, power, and beauty.

"Sex isn't something I love to do"

The look on his face told me everything I needed to know. Most people love sex. I do not. I mean, I like it and all. I just don’t capital-L Love it. Wow, that sucks. Sex for me brings up emotions. Sometimes it physically hurts because of tension from the emotions I have held inside me for so long. Some really bad things have happened to me in my life around sex. I have wounds. So do a lot of women. Maybe you are one of them. Here I am, finally with my soulmate, and I do not enjoy sex the way I think I should. That needs to change.

It’s not like I don’t have desire. Four and a half seconds of kissing my beloved (yes, I have timed it) sends a little ZING down to the sex fairies who live in my labia and wakes them up. But actual sex? The kind where a part of his body is inside a part of mine? Doesn’t work so well for me.

It’s not like I don’t feel sexy. Thanks to martial arts and a mindful diet, I feel pretty sexy in my body most of the time. I know I look good and I am doing all that I can to look better. I feel pretty awesome that way.

But there is something missing for me. Pieces that need love and healing. This month I have decided to ferret them out and love the hell out of them, because I want my man. I want my sexy back.

FOA reared its ugly head today. One minute Soulmate was telling me how much he loves being with me nearly 24/7 (we DO spend an awful lot of our time together, and it is awesome – I’ve never before wanted to be with someone so much) and the next minute there was a huge SCREEE! and he’s talking about going out nights to dance tango (read: dance tango with Not Me), and I’m suddenly feeling like I can’t breathe, my chest is tight and the room goes almost dark and the Greek chorus in my head is saying OMG OMG OMG he doesn’t want meeeeeeee.

And now we are at a Seattle coffeehouse: cliché indie singer-songwriter music softly hissing from overhead speakers, the heady scent of roasting coffee beans in the air, Soulmate and me sitting on orange velvet chairs with our MacBook Pros balanced on our laps. This man is WITH me, FOA is all in my head, and still I must process the OMG he doesn’t want meeeeee that came up earlier.

The Girl Forgot She Was A Wild Goddess...

Some of the messages that the girl heard were directed at her. Clean your plate … Starving children in China would be happy to have what you’re having … Eat your mother’s cooking … Eat your vegetables before you eat your bread … No dessert for you! … You have been misbehaving – leave the table.

Some of the messages came from the girl’s mother, about her own pain. Am I fat? … I still weigh 120 pounds – that’s all I weighed when I got married … I only gained ten pounds when I was pregnant with you … Ugh, I need to go running … Your uncle called me ‘piano legs’ when I was little … Here, you’ll want a padded bra, you have a small chest like mine.

Some of the messages came from the girl’s own head. I see myself in the glass window – my stomach looks fat! I’d better suck it in and hold my breath. There, that looks better … I am not thin enough … I should be a size zero like my friends.

The messages came faster and more frequent as the girl got older. Soon she barely ate anything. The less she ate, the better she felt. She felt lighter. She did not have to be in her body anymore, her body that was wrong, wrong, wrong.

She thought she was free.”

Physical boundaries pertain to our physical space and what we will or will not allow.  They include social rituals such as handshakes and hugs, as well as our feelings about nudity, loud noises like music, and locked doors.

Material boundaries determine how we treat our material possessions — do we lend or give our books, car, money, or clothes?

Sexual boundaries protect our level of comfort with sexual touch, sexual activity, and even conversation of a sexual nature. With whom do we feel comfortable giving or receiving sexual energy?

Mental boundaries are about our thoughts and beliefs. Are we suggestible or do we have a strong sense of what we believe to be true when we engage in discourse? Can we listen with an open mind to someone else’s beliefs and thoughts that conflict with ours?

Emotional boundaries help us keep our emotions our own responsibility, without expecting someone else to take care of them for us. Conversely, they protect us from taking responsibility for someone else’s emotional well-being or problems. Healthy emotional boundaries protect us from accepting or assigning blame where it is not warranted, and  from taking others’ comments personally.

Journal about a time when your boundaries were crossed.

What emotions came up for you? (anger, sadness, fear, joy)

How did you respond?

Journal about a time when your boundaries were crossed.

What emotions came up for you? (anger, sadness, fear, joy)

How did you respond?